In the dietary supplements industry, startup companies tend to follow a familiar arc: a marketing or business whiz observes a gap in the marketplace, comes up with a potential new product or business model to address it, focuses on brand-building and recruits a science team to oversee R&D.

Other startups attempt to take the reverse approach. “So often, a researcher says they have this great idea for a product based on a project they’ve been working on, and I’ll shake my head because I know it will not be a commercial product,” says Mike Bush, managing partner at GrowthWays Partners and executive director at Kerry. “They’d have an audience of only about nine people, and the researcher is certainly not a business person anyway.”

A much less traveled path from product inception to launch to commercial success is something like this: an esteemed National Institutes of Health–funded researcher with more than 400 peer-reviewed published articles to his name develops a novel supplement line and support program that fulfills a widespread consumer need. This researcher, along with his entrepreneurial son, happens to have launched several consumer products in the past, giving the duo the collective expertise to nurture this latest concept into a winning enterprise.

This third scenario is the story of BIOHM, a microbiome-based brand launched in March 2017 by Mahmoud Ghannoum, Ph.D., director of the Center for Medical Mycology at Case Western Reserve University, and his son, Afif Ghannoum, a biotechnology attorney, entrepreneur and inventor who holds multiple patents. The company engineers specialized probiotics and also offers a suite of innovative services to help customers achieve optimal health, but it is the science behind the products and the program that gets them the NBJ Science and Innovation Award.

“Dr. Ghannoum has quite a pedigree and does excellent research, so it is nice to see that, rather than a group of financial or marketing people assembling a science team later on. This company was founded on science first, and then they started the business,” Bush says. “This may be a common path for medical and healthcare companies, but it is not nearly as common in our space.”

BIOHM’s science-centric model, along with its unique products and wellness services and its ongoing contributions to further microbiome study, make this innovative young company a shoo-in for the 2018 NBJ Award for Science and Innovation.

The Mycobiome Gets its Due

Ghannoum is, by all accounts, the godfather of the mycobiome, a term he coined decades ago to represent the vast but oft-overlooked fungal community dwelling in the human digestive tract. It was through his early studies of candida that he became aware of and focused on fungal microbes, their interactions with gut bacteria and their combined impact on health. Since then, Ghannoum has been the torchbearer of this niche area of microbiome science, demonstrating the importance of fungi—which, like bacteria, include both beneficial and deleterious species—through his ongoing research.

However, until recently, Ghannoum’s work remained largely under the radar, as the bulk of microbiome study over the past few decades has focused on bacteria. Product development has mostly followed that tack, with probiotic supplements, designed to populate the gut with beneficial bacteria, flooding the marketplace.

But it wasn’t until his game-changing 2016 discovery that Ghannoum and his son were driven to launch BIOHM. In his and mark study published in mBIO, the journal of the American Society for Microbiology,

he demonstrated that detrimental bacteria and fungi work in concert to form biofilm, a digestive plaque akin to the gunk that builds up on teeth. Biofilm coats the harmful bacteria and fungi in the gut, allowing both types of microbes to wreak havoc in the body.

With this new knowledge, Dr. Ghannoum developed a line of probiotics that supply not only carefully selected beneficial bacteria but also beneficial fungi, plus a digestive enzyme shown to neutralize and break down biofilm—a three-pronged approach to promoting a healthy, balanced microbiome. The company began by selling its probiotics direct to consumers online and quickly amassed a loyal customer base. More recently, BIOHM has also forayed into social selling, training elite ambassadors to educate on and market the products within their own networks.

“We like to back companies that are based on science with the brand built around it,” says Shad Azimi, managing partner at Vanterra Capital, an early private-equity investor in BIOHM. “There are a lot of great brands out there, but they don’t have good science. Dr. Ghannoum and Afif are also large investors in own their business—they put their money where their mouths are.”

As Azimi sees it, along with building a powerful direct-to-consumer brand, BIOHM can also find success via the B2B channel, by becoming an ingredient player across various supplements. “BIOHM can be like the ‘Intel inside’ for entire supplement and even food categories,” he says. “Think, whey protein or yogurt ‘powered by BIOHM.’”

BIOHM’s probiotic formulations alone would make this company stand out, but its offerings go much further. Most notably, and uniquely, it supplies the BIOHM Gut Test. “A consumer collects a fecal

sample, sends it back to us, and we use next-generation sequencing to isolate the DNA of the bacteria and fungi present,” Dr. Ghannoum says. “This gives us a profile of which microorganisms live in this person, as each microbiome is different. For instance, they may have an increase in proteobacteria or candida.”

Then, based on this analysis, done in conjunction with Case Western’s Center for Medical Mycology, a BIOHM nutritionist consults with the customer to provide recommendations. “They’ll explain what they should do in order to bring back balance to the microbiome, not just with a probiotic but also with their diet, as we should not rely only on supplements,” Dr. Ghannoum says. “Or, for someone whose microbiome looks good, our recommendation may be to keep doing what you are doing, but if you want to supplement your gut with good organisms, use our probiotic.”

Customers can then keep tabs on how their microbiome changes over time by repeating the Gut Test after they’ve made dietary tweaks and incorporated BIOHM products. “This is why I don’t look at BIOHM as a pure consumer-products play as much as I do a consumer microbiome company,” Bush says. “This is what the whole quantification of personalized data is all about, and it’s nice to see someone in the microbiome space doing something innovative with it.”

Besides just supplying BIOHM customers with valuable insight into their guts, the microbiome samples collected by the company add to the vast database Dr. Ghannoum has been amassing through his years of research for NIH.

“We have thousands of samples and are starting to look at what patterns we see in the U.S. population so we can try to help people,” he explains. “We are a company based on science, and in addition

to selling products, our main aim is to give back. We are doing a study on autism, getting fecal samples back to see where there are imbalances, and then we hope to be able to suggest foods and supplements that can help these kids. Eventually, our plan is to do something with Parkinson’s and Alzheimer’s.”

Azimi views this database as yet another path to success for BIOHM. “They have been approached by pharmaceutical companies wanting to buy their data,” he says. “Science suggests there is a link between

the microbiome and autism, so for a company wanting to develop pharmaceuticals for autism, having access to BIOHM’s data can be very valuable.” 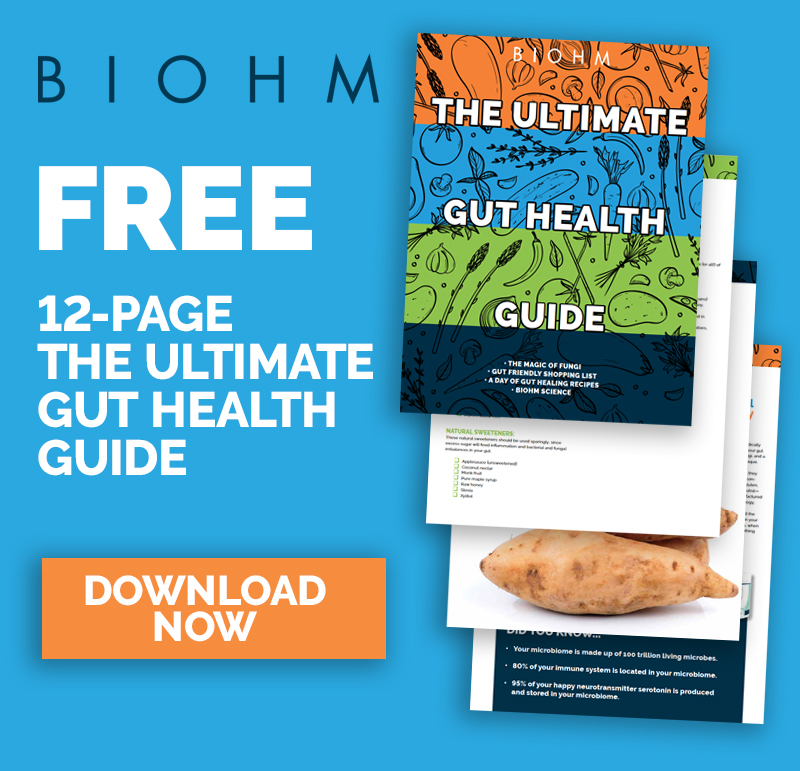